Does the climate change extremely? Part 2

Does the climate change extremely? Part 2

Was Al Gore an alarmist? Are there no more extreme climate events than there used to be?

As I wrote in the previous post, a close family member said "[He] does not deny that there is a climate, or that it changes".  I looked at the claims made about the global climate made by a Dutch political party and we discussed the first one they made.

Loosely speaking, they say the climate is always changing and it's now a bit hotter and it used to be a bit colder and it was a bit hotter before that. We looked at the global temperature record and found that it definitely does change and that the story they tell focuses on the Northern Hemisphere. The global temperature has gone up - despite the current active trend - and it is accelerating rapidly.

In this post we look at their second claim, that "extreme climate events do not happen more frequently or cause more damage than historic events of a similar nature".

Is there no increase in extreme weather events?

According to their second claim (my translation):

Despite the warming and the possible role of CO2, this did not lead to an increase in extreme weather events like cyclones, tornadoes, flooding or droughts. The number of victims of climate related disasters has actually decreased by 95%. Due to particularly technological advances we are better protected against extreme weather and flooding.

This is an interesting claim, in that it goes against the consensus view. The fifth assessment report (AR5) defines a common approach to communicating the degree of certainty, which we should mention. For confidence level, they just use “very low”, “low”, “medium”, “high” and “very high”. For likelihoods, they use:

Note that “Low confidence” in a certain cause for events means that we cannot prove it is true. That is something different than saying it is not because of that - that would be high confidence again. Low confidence just means we can’t say what the reason is. Here is a table (SPM.1, WG1AR5) showing the overview, which I will summarize afterwards: 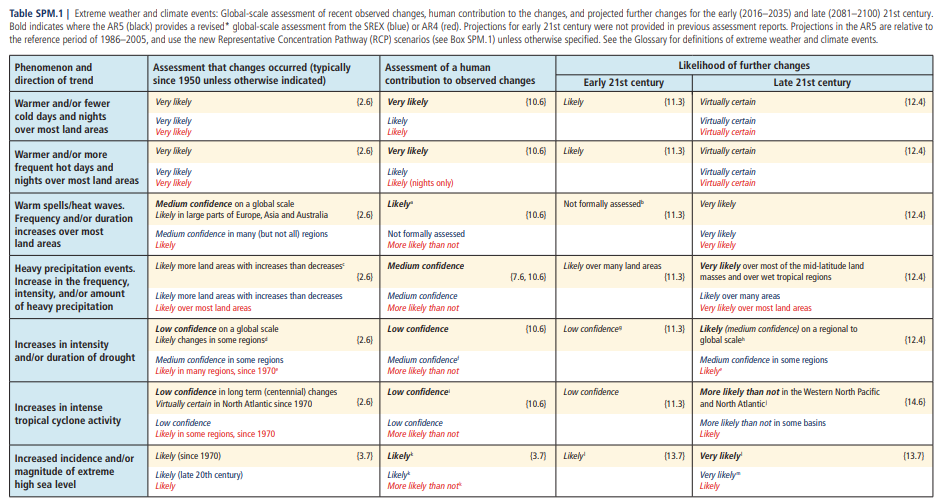 Let me summarize some points from Section 1.4 of the AR5 Synthesis Report, pretty much the summary of consensus views.

It seems pretty clear that the mainstream scientific view is directly opposed to the claims made by the Dutch political party I mentioned.

According to the Summary for policymakers, there's a few things we will have to deal with. Likely to increase in the frequency of heavy precipitation, average tropic cyclone strength. There is medium confidence that droughts will intensify. Very relevant to the Netherlands is of course that the mean sea level rise will very likely contribute to more extreme coastal high water events.

The main driver of change is of course global warming. Let’s look at a few statements on this from the special report on global warming of 1.5 degrees:

A1: Human activities are estimated to have caused approximately 1.0°C of global warming5 above pre-industrial levels, with a likely range of 0.8°C to 1.2°C. Global warming is likely to reach 1.5°C between 2030 and 2052 if it continues to increase at the current rate. (high confidence) (Figure SPM.1) {1.2}

A2: Warming from anthropogenic emissions from the pre-industrial period to the present will persist for centuries to millennia and will continue to cause further long-term changes in the climate system, such as sea level rise, with associated impacts (high confidence), but these emissions alone are unlikely to cause global warming of 1.5°C (medium confidence). (Figure SPM.1) {1.2, 3.3, Figure 1.5}

A3: Climate-related risks for natural and human systems are higher for global warming of 1.5°C than at present, but lower than at 2°C (high confidence). These risks depend on the magnitude and rate of warming, geographic location, levels of development and vulnerability, and on the choices and implementation of adaptation and mitigation options (high confidence). (Figure SPM.2) {1.3, 3.3, 3.4, 5.6}

Can we prevent this?

That depends on what you are asking. At the moment, we are still causing this by outputting greenhouse gases at prodigious rates. We need to cut down on this, and the faster we do this, the least change we will have to deal with. Let’s take a look at an infographic from the SR15: However, that accord was heavily criticised as being too soft - it is not binding, and it is assuming the above timelines that are optimistic at best. Those timelines are very optimistic because there are a number of natural mechanisms that couldn't be taken into account. For example, methane stored under the melting permafrost cannot be accurately predicted, but will heavily contribute towards the world emissions.

If we’re not careful, if we don’t do anything, we would end up at about 1.5 in 2040. However, if we take the changes required - basically a bit more than the paris accords - then we will be able to limit the warming to 2050. 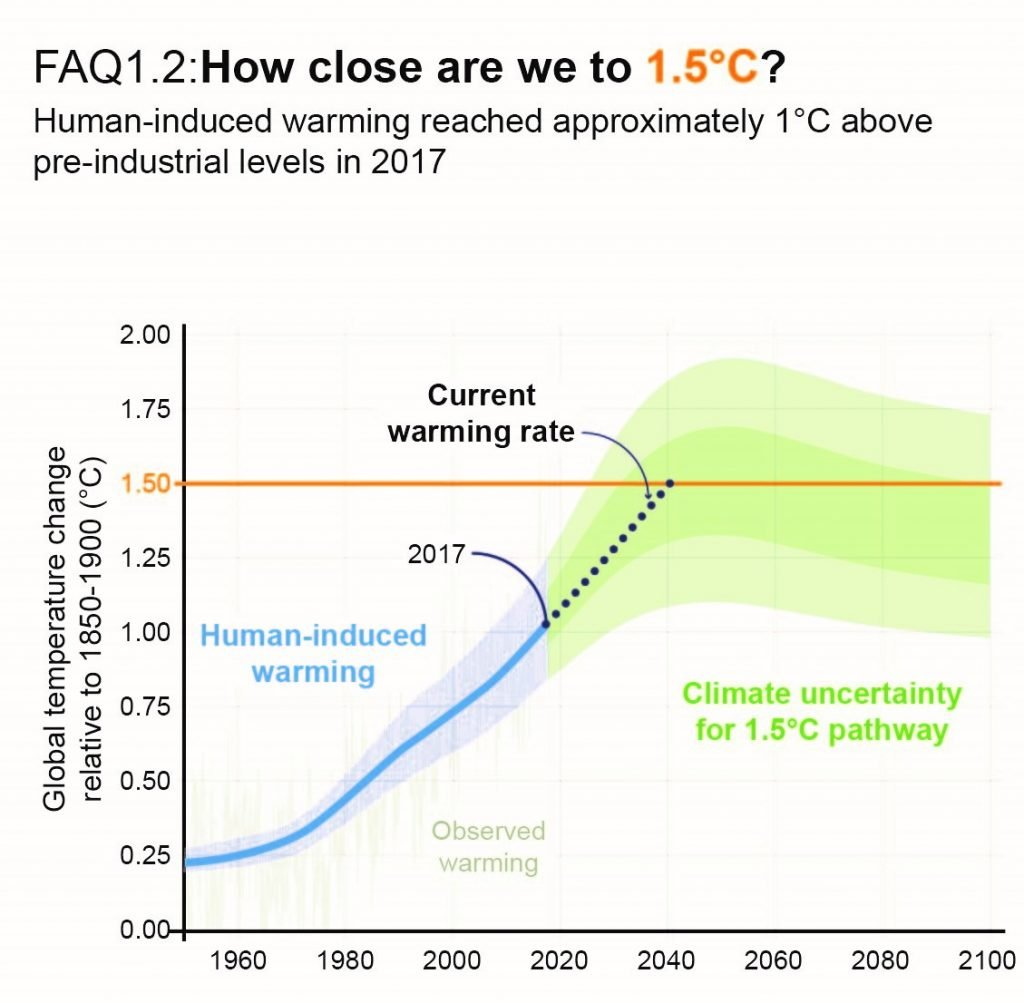 What we have seen in  the first part of this blog, the climate has been changing throughout human history, with a rapid growth in emissions starting around the industrial era. What we saw in this blog post is that a number of extreme events have become more common or became even stronger.

And we saw that the climate accords are good accords, if and only if we actually meet the targets we set there. Those goals are a bit modest, so we should probably do more - but we have to meet them. Meeting them is the bare minimum of what we can do.

And the only way this can happen is through political changes. Look, the past 30-50 years have shown us that it’s not going to happen by itself. Despite the rapid adoption of the predictions and conclusions about the world, this has not made it into industry or politics to a sufficient degree. The only way to influence that is by voting.

Look, I don’t care what you vote. If you think the way forward is by the government subsidizing elon musk to solve all our problems - sure. Do it. But this is a problem that we are facing now. Time is short. This is a priority.

There is a climatecrisis. Vote to solve it.

July 24, 2014
An anti-GMO article was posted on IFLS; Let's respond. The 8 shocking reasons are false. Let me show you. Response: [8 Shocking reasons GMO's are bad for you]. 1. Health consequences are largely unknown. [health consequence of gmo] on scholar.google gives a great many results. This article seems rather nice: http://rameznaam.com/2013/04/28/the-evidence-on-gmo-safety/ 2. GMOs are unlabeled in America. And the european union has banned gmos! That's good to know, as I live there and didn't know that. Indeed, the EU doesn't  know it either; http://ec.europa.eu/food/food/biotechnology/index_en.htm . On a sidenote, they aren't labelled in our shops either. 3. Genetic modification reduces genetic diversity. That's not even true; we introduce a variation artificially, but they still vary. Indeed, the aim of GMO's is often to increase the robustness of the crop to many kinds of things, including those noted in this reason. I'm not sure how
Read more

Introduction While reading my delightful new book - which I will name at the end - I realised how only a small part of people realises all implications of natural selection. It was Charles Darwin, in the Origin of species (By means of natural selection) that first postulated an explanation of evolution by a one mechanism of heritability and another of variability. We know both mechanisms; they are in our DNA. DNA is the mechanism of heritability, and copying errors and sexual reshuffling are the mechanism of variation. Not too long ago, breeding was invented. By this I do not mean merely the breeding of livestock, but the deliberate selection of offspring so as to produce some sort of phenotypical change. The result are the many 'races' of dogs and cats we are familiar with.  The first chapter of the Origin is `variation under domestication', and is essentially about breeding or artificial selection. From there, Charles Darwin leaps onto 'variation under Na
Read more