Showing posts from September, 2016
Show All

Rebuke: "On the physics of high-rise building collapses". 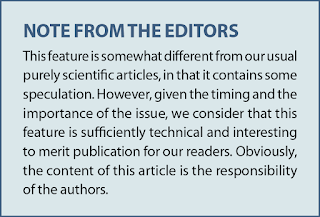 Introduction A while ago, I was alerted to an article by "four physicists" in a "scientific journal". Apparently, these authors had "shown" that the conspiracy is real. Behold: A European scientific study has concluded that on September 11, 2001, the Twin Towers were brought down by a controlled demolition. The study, conducted by four physicists and published in Europhysics Magazine, says that “the evidence points overwhelmingly to the conclusion that all three buildings were destroyed by controlled demolition.” (your news wire)  We discussed the article briefly, mostly dismissing it because it is not a scientific study , nor is it by four physicists, and its conclusions do not follow from the evidence. However, the conspiracy crowd seems real happy with it. The Credible Hulk, for instance, had several `truthers' all over his page ( here ). I decided that, as a physicist, it would perhaps be interesting to write a rebuke of this article. Now
Read more

Introduction While reading my delightful new book - which I will name at the end - I realised how only a small part of people realises all implications of natural selection. It was Charles Darwin, in the Origin of species (By means of natural selection) that first postulated an explanation of evolution by a one mechanism of heritability and another of variability. We know both mechanisms; they are in our DNA. DNA is the mechanism of heritability, and copying errors and sexual reshuffling are the mechanism of variation. Not too long ago, breeding was invented. By this I do not mean merely the breeding of livestock, but the deliberate selection of offspring so as to produce some sort of phenotypical change. The result are the many 'races' of dogs and cats we are familiar with.  The first chapter of the Origin is `variation under domestication', and is essentially about breeding or artificial selection. From there, Charles Darwin leaps onto 'variation under Na
Read more
More posts