There's a fun little topic in biology that I'd like to introduce you to. It's called 'convergent evolution'. As the name implies, there are two distinct groups that evolve to the same point.

For instance, many of us remember Pterodactyls; flying dinosaurs whose wings are essentially 'hands' spread out with skin in between. Which is often called a "bat wing". That's a fine example, because a bat is a mammal and a pterodactyl a reptile. Their last common ancestor most certainly didn't have these wings.

Let us talk about an illustrative example. To the right, you see an drawing of a hummingbird. These birds are usually quite small. However, they beat their wings typically about fifty times per second. This creates a humming sound that led to their name.

Humming birds have among the highest metabolism among animals. Most creatures ingest their food, which goes through the congestive system throughout which nutrients are absorbed. Fructose ('
fruit sugar') excesses are converted to fat in the Liver, which is stored on the body. When you exercise, fat is released from storage and converted into the energy required to move. That's the normal story, but hummingbirds don't do that. Unlike most animals, among which humans, hummingbirds can move the sugar to their muscles without energy conversion.

Of course, hummingbirds evolved on a particular energy-source: Nectar. However, they also need this to sustain that metabolism. When they rest or food is not readily available, hummingbirds go into torpor. This is a state similar to Hibernation (e.g. bears in winter) in which metabolism and other processes in the body run at extremely low rates.

Hummingbirds are extremely interesting, bright-feathered specialists that do deserve attention. You can read more about them on e.g. Wikipedia.

Most of us have seen hummingbirds, either in the wild, on a video, or even in a zoo or similar. Some things you remember; not being able to see their wings because of the rapid beat. That they hover before a flower while inserting their long beaks to suck nectar. Their rapid movement and manoeuvrability when not hovering.

To the right, we see another creature. The rapid beat, the humming sound, the hovering for nectar while inserting a long 'beak', the rapid movement and manoeuvrability - all of this it shares.

I knew of them by Richard Dawkin's Greatest Show on Earth, a book on the evidence for evolution. Still, I hadn't seen them or knew I could encounter them. So even I was shocked slightly to run across it in les Houches (France). Still, I couldn't mistake it for what it was: A moth.

The Humming Bird Hawk-moth has evolved off the same high-sugar diet of Nectar, and has settled on the same strategy. While most butterflies and moths flap their wings relatively slowly, the hawk-moth beats it wings at a slightly slower rate than the typical humming bird, but still faster than the human eye follow properly, and far faster than other moths or butterflies.

To the left you see a drawing of a hummingbird hawk-moth caterpillar, which is very distinct from a hummingbird chick. I include this to point out the extremely large difference between the two. Birds are the avian descendants of dinosaurs, while moths (Lepidoptera) are insects that undergo metamorphosis.

It should be clear that these two lines are distinct, and only share a diet. And they have settled on nearly the same solution and strategy. This, then, is the clue for what convergent evolution is:


Convergent Evolution is the independent evolution of similar features in species of distinct lineage. 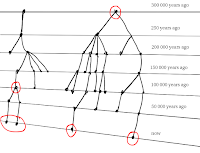 There's also something called parallel evolution, and the difference is subtle.  To the right you see an image that depicts 'family trees', but on the species level. The red circles denote either a common origin or the species now.

A few common examples of convergent evolution of animals can be found in Dogs and Hyenas (video below by PhDComics), bats and pterodactyls, fish and dolphins. In plants, you can think of leaves, evolved multiple times such as for kelp and trees. Thorns are also a common example. A very strong one is Coffee and Tea; both contain caffeine. After the movie, we'll discuss a far more basic type of convergent evolution that deserves some attention.

One 'argument' that Creationists often come up with is that the eye is too perfect to have evolved. Well, the camera-eye we share with e.g. Octopi is a convergently evolved feature. It has evolved in Octopi, mammals and Box jellyfish. The big difference is that the eye in mammals and jellyfish is wired in a way that would get any engineer fired - the wiring is in front of the camera. Octopi are properly wired.

So as it turns out, convergent evolution can happen on the far smaller biochemical scale as well. This might not be that surprising. Consider the Lenski experiment, the longest running experiment in  the evolution of twelve separate E. Coli lines, that has been active since 1988. One of the lines evolved the ability to grow on citrate, which was not a previous ability.

Consider two of these bacterial lines. They are kept separate for a long time, maybe a thousand years. And suddenly, both of them encounter citrate, and both are found to have adapted. Would it not be expected that these bacterial cells have settled on the same solution? After all, they share very similar circumstances, in terms of what it costs them and what it gains them.

As it turns out, this does happen. For instance, bats and dolphins share high-frequency echo location, and both have amino acid replacements in the protein 'prestin' that are convergent. Jawed vertebrates and jawless fish both evolved Hemoglobin. Hemoglobin is a large protein in the centre of which is an iron core, to which Oxygen binds temporarily. It is what our red blood cells use to transport oxygen throughout the body. There are many more examples, but they are hard to illustrate and we will trust the experts.

Convergent Evolution is when two species that are not recent 'relatives' on the species-level, evolve similar features or solutions independently. We've used the example of the Hummingbird and the Hummingbird Hawkmoth to illustrate the difference between convergent and parallel evolution, and went over a host of other examples. 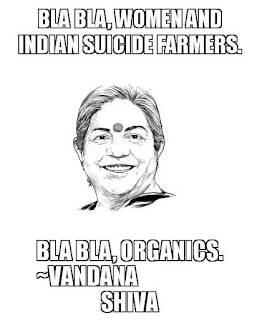