Showing posts from June, 2016
Show All

Rupert Sheldrake and Science as Dogma 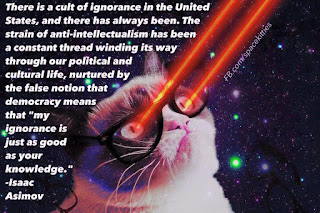 Introduction A somewhat heated discussion started on the page Cats in Space Quoting Scientists . They had shared the image to the right, and someone had responded. She stated that this trend is further engendered by science becoming dogma. This is actually something that is said rather often, and fringe scientists are paraded around by antis for this reason.  In this particular case, some heated responses were made and she posted a video to back her up. That video being a TedX talk by Dr. Rupert Sheldrake, a former plant biologist that went into the realm of woo somewhere in the 1980s. He has since published parapsychology nonsense in some pay-to-play journals and as is common for woo-peddlers, he buffs up his credentials for people that do not double-check it. For the record, he hasn't published any peer-reviewed science nor does he hold a academic position, at all. The person that started the conversation asked that we address the ideas an evidence of Rupert Shel
Read more 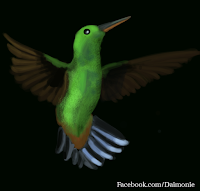 Introduction There's a fun little topic in biology that I'd like to introduce you to. It's called ' convergent evolution'. As the name implies, there are two distinct groups that evolve to the same point. For instance, many of us remember Pterodactyls; flying dinosaurs whose wings are essentially 'hands' spread out with skin in between. Which is often called a "bat wing". That's a fine example, because a bat is a mammal and a pterodactyl a reptile. Their last common ancestor most certainly didn't have these wings.  A drawing of a hummingbird. Convergent evolution Let us talk about an illustrative example. To the right, you see an drawing of a hummingbird. These birds are usually quite small. However, they beat their wings typically about fifty times per second. This creates a humming sound that led to their name. Humming birds have among the highest metabolism among animals. Most creatures ingest their food, which goes
Read more
More posts